Head in The Cloud(s)

There's more evidence of $BA Boeing brand damage after the battery debacle. Some of this has been listed in a previous post on the Buzzient blog:

Since this original post, there's been a lot of noise about various aircraft fleets delaying purchase of 787's or even shopping for alternative airframes. If we take a look at Buzzient sentiment analytics for the last month, we can see this clear divergence for the 787 product line, where sentiment drops appreciably when compared to other Boeing products: 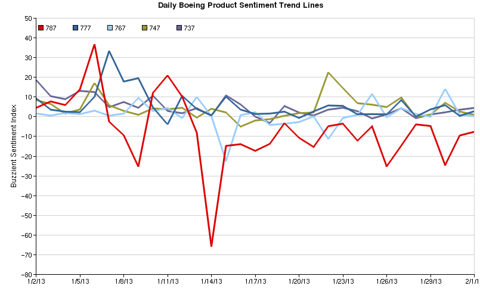 The dramatic drop in the red line (787 model) corresponds to the time period where it became known how bad the battery problems are. Since that time, Boeing announced decent results, but we can see in the social sentiment charts a lingering gap in product sentiment. Will this show up in delayed orders in subsequent quarters? I think prudent traders, using this Buzzient data alongside other measures would advise a HOLD on $BA.

This is only a preview. Your comment has not yet been posted.

The letters and numbers you entered did not match the image. Please try again.

As a final step before posting your comment, enter the letters and numbers you see in the image below. This prevents automated programs from posting comments.

Having trouble reading this image? View an alternate.

Comments are moderated, and will not appear until the author has approved them.

(You can use HTML tags like <b> <i> and <ul> to style your text. URLs automatically linked.)

(Name is required. Email address will not be displayed with the comment.)